Home » Blog » Affinity Fraud: How to recognize it and how to prevent it

Affinity Fraud: How to recognize it and how to prevent it 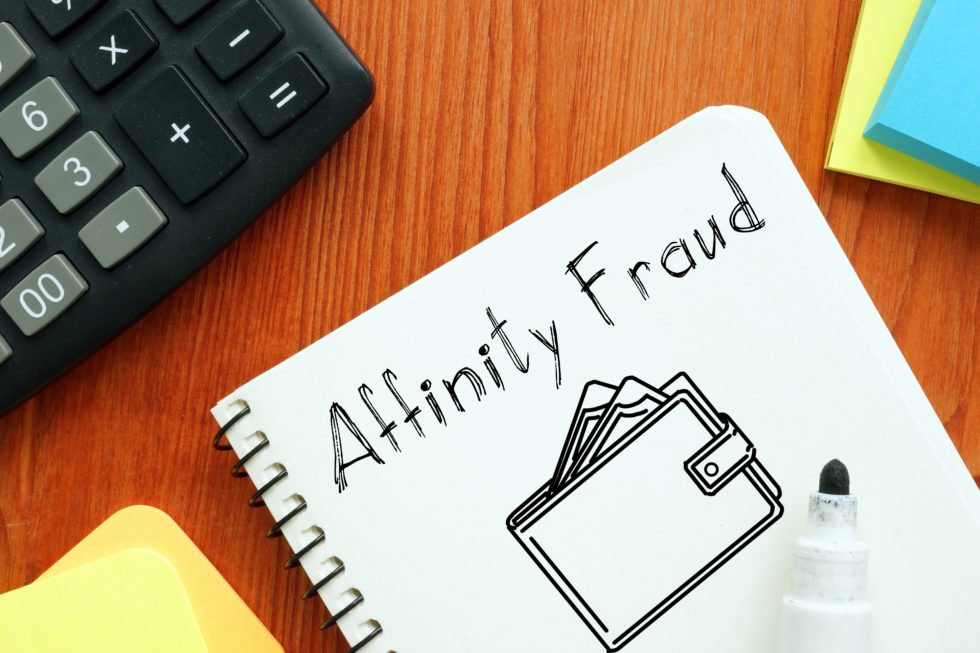 “Affinity Fraud” is the latest in a long line of terms used to describe various frauds, and many of the people who use the phrase in social media don’t actually know what it means. To understand affinity fraud, you first have to understand the definitions of “fraud” and “con artist,” both of which I will explain in the following paragraphs. Then I’ll give you some real-life examples of affinity fraud and give you some tools to avoid becoming a victim.

Fraud is a lie.

When asked to define fraud, most lawyers will give you a legalistic definition like:

Fraud consists of some deceitful practice or willful device, resorted to with intent to deprive another of his right, or in some manner to do him an injury…. Fraud, In the sense of a court of equity, properly Includes all acts, omissions, and concealments which involve a breach of legal or equitable duty, trust, or confidence justly reposed, and are injurious to another, or by which an undue and unconscientious advantage is taken of another.

There is a much simpler definition of fraud: Fraud is a lie. Think about it. You can’t lie by accident, so a lie is by definition intentional. And, the liar lies because they don’t want the hearer to know the truth. A lie is a false statement that is intended to convince the hearer to react differently than they would if they knew the truth.

For the fraud to be successful, the hearer must trust and believe the liar…which brings me to the next definition: con artist

A con artist is an effective liar.

Many criminals use weapons and fear to persuade people to part with their money and belongings. In contrast, a con artist uses words – either spoken or written. The con artist’s greatest skill is being able to lie persuasively and believably so that their victim’s voluntarily give up their money or property. To do this, con artists have to convince people to trust them.

There are numerous words that we use to describe people who have this skill: hustler, swindler, bunco, flimflam man, scammer and more. But, they all describe the same person: a skilled liar.

Affinity Fraud is lying to your own people to cheat them out of money and property.

A con artist must gain their victim’s trust. Otherwise, the victim will not believe the lies and will not succumb to the fraudster’s persuasion.

As a general matter, we are all more likely to trust people who are similar to us, and con artists, who do not feel empathy, take advantage of our trust. They will take advantage of people who share the same social groups, culture, country of origin, language, religion, food, neighborhood, race and more.

Here are some examples from the news and from my legal practice as former white collar criminal prosecutor and trial lawyer:

How to Protect Yourself from Affinity Fraud?

In my humble opinion, every single person can be a victim of a con artist because we all trust some people in our lives – whether they come from our neighborhood, go to our church, come from the same country, or are old high school friends – and any one of these people could be a complete fraud. I’m sure there are psychological explanations for these people – psychopaths? – but all I know is that they know how to blend into society very well.

Psychopaths can appear normal, even charming. Underneath, they lack any semblance of conscience. Their antisocial nature inclines them often (but by no means always) to criminality.

Having said that, the same psychopath who can scam you probably can’t scam me and vice versa…because we come from different backgrounds and trust different people.

Two key pieces of advice to avoid becoming a victim: